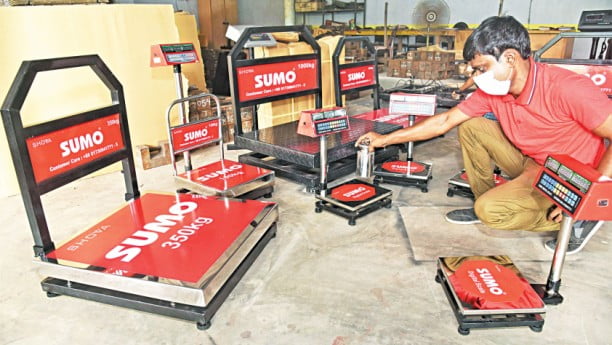 A factory in Bogura town is going above and beyond to create a brand of fame and fortune as it is manufacturing world-class digital weighing scales, which may let Bangladesh cut reliance on imports and even export those.

Shova Advanced Technologies Ltd has been producing digital scales and an array of other products under the brand name of “Sumo” in the factory since 2010.

The factory is situated on two bighas of land in Malotinagar area of the town, housing warehouses, workshops and labs.

Prices of scales made by the company begin from Tk 2,700 each and currently it has the capacity to produce various scales worth around Tk 200 crore annually.

More than 200 educated youths, including 97 engineers with a bachelor of science and diploma degrees, have been employed here.

Around 100 types of scales from tabletop scales to weighbridges are now being produced in the OIML, ISO 9001:2015 and BSTI certified factory of Shova Advanced Technologies Ltd.

More than 400 types of electronics components are being used to produce the digital scales. With the parts imported from different countries of the world, including China, Korea, Japan and India, the engineers of the factory are making circuit boards, power supplies, displays and transformers as required.

The idea is the brainchild of Syed Ahamad Kiron, who hails from Bogura’s Dhunot upazila. He is the managing director and CEO of Shova Advanced Technologies.

He, however, wanted to be in the restaurant business. He studied hotel management in Cyprus. But as the hotel business was not doing well in the 1990s in Bangladesh, he gave up the idea and rather worked for a while in a multinational company.

He left the job and moved to South Korea where he joined a Japanese company. He returned after seven months and started the business of distributing consumer goods, cosmetics and household products of different well-known brands, including Godrej, ACI, Marico, Kallol and Alpenlibe, Kiron said.

In 2008, he bought a 50-kilogramme sack of onion from a local market in Bogura. But to his utter surprise, he found the bag to contain 48 kgs of onion when he weighed it after reaching home.

Kiron thought it happened because of faulty weighing scale. Then the idea of importing digital weighing machine came to his mind.

He gave the example of the rice-carrying trucks. As Bangladesh is an agrarian economy, it is always in constant need of rice.

Kiron found a rice mill in Naogaon from where the trucks used to carry 300 grams of rice extra with each 50-kg bag every day.

If a truck contained 300 bags of rice and every day 10 trucks were sent out from a single factory, the daily loss was 900 kg.

“This is one of the most overlooked sectors in our country. This ignorance is killing our economy day by day as a slow poison,” added Kiron.

Subsequently, he visited different digital weighing scale factories in India. And for the first time, more than 400 digital tabletop scales were imported from India in 2009.

“At the time, I had to struggle a lot to sell the scales to traders, including grocers, vegetable sellers and sweet shop owners in Bogura town as it was a new product for them then,” he added.

Gradually, he started marketing the product in other districts. Apart from the tabletop scale, he started importing other scales from countries, including Korea, China and Taiwan.

But Kiron was not satisfied with the sale of the imported goods. He planned to manufacture the scales in the country.

“I felt very bad to create a market for other countries by selling them to local buyers in this way. I thought if ‘Made in Bangladesh’ were inscribed on the scales, it would be a great achievement for us.”

Plastic is used in the structure of imported tabletop scales while Sumo digital scale is made up of stainless steel.

Also, a 30kg electronic digital scale is produced having 5-gram accuracy balance internationally while the local company manufactures the same quality scale with an accuracy of one gram.

The product is much cheaper than those imported. A 100-tonne truck scale of Sumo Digital would cost Tk 29 lakh. It would cost Tk 1 crore if imported, he said.

Kiron said their products have reached the furthest corners of Bangladesh and covered all kinds of industries with more than 100 types of scales.

Around 500 government and non-governmental industries and institutions use its products.

The company has taken all the preparations to export products to countries such as India and Malaysia. The company plans to open outlets in each district from January.