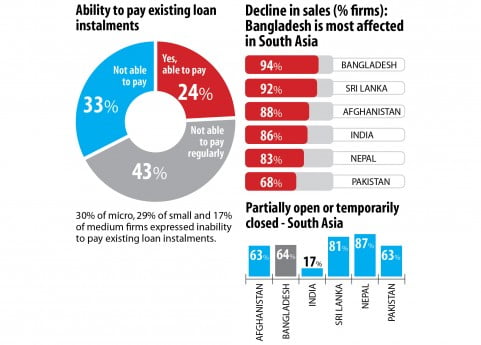 A whopping 37 per cent of employees in the micro, small and medium enterprises (MSMEs) lost their jobs, either temporarily or permanently, within a month and 94 per cent of MSMEs experienced a sharp drop in sales because of the coronavirus pandemic, according to a new survey.

The study — Business Pulse Survey: Impact of Covid-19 On MSMEs in Bangladesh — shows that 70 per cent of all workers are now in vulnerable jobs, with businesses either temporarily closed or only partially open.

This led to calls for ramping up policy support for the MSMEs to prevent their downfall amid plummeting sales and save jobs as only 2 per cent of them received support from the state.

“This indicates that policy support is not reaching a large number of its target population. The proportion is even lower for micro firms, which stands at 1 per cent,” the report said.

Forty-nine per cent of micro firms reported that they did not have adequate liquidity to sustain themselves for the next three months, compared to 40 per cent and 33 per cent respectively of small and medium-sized firms.

The survey was carried out in Bangladesh by International Finance Corporation (IFC) and World Bank, in partnership with the UK’s Foreign, Commonwealth and Development Office (FCDO) from June 4 to 15.

“We are working hard to bring the economy back to its normal stage,” said Fazle Kabir, governor of Bangladesh Bank, while addressing a webinar marking the report’s launching yesterday.

“We are committed to implementing the stimulus packages and have instructed banks to provide loans to the cottage, micro, small, and medium enterprises at subsidised interest rates.”

Under the survey, 1,044 telephone calls were made, of which 516 were successful.

According to the findings, 91 per cent of the businesses suffered the worst decline in cash flow. Similar economies such as Vietnam witnessed 66 per cent while Indonesia 69 per cent.

It found that 37 per cent of women-owned firms had temporarily shut down operations, compared with 21 per cent of firms owned by men.

Around 83 per cent of firms are incurring losses and 64 per cent are temporarily closed, the survey found.

Across the sector, 94 per cent of businesses experienced sharp drops in sales. These business losses have choked cash flows, with 33 per cent of firms saying they are unable to pay instalments on existing loans.

Now, 58 per cent of firms have reduced their working hours. More jobs are in jeopardy as there seems to be no end to the pandemic in sight.

According to the IFC report, urgent steps are needed amidst this situation to help businesses survive.

“The government of Bangladesh has responded quickly and effectively by implementing stimulus packages and other policy measures to help the MSMEs. But uptake till now has been slow.”

The survey revealed that 76 per cent of firms were unaware of existing stimulus packages from any financial institutions.

“No doubt, as awareness increases, greater numbers of the MSMEs will reach out for help,” the survey report said.

Poor access to finance for the MSMEs is already a fundamental challenge at the heart of the country’s financial and economic development. The SMEs in Bangladesh suffer from a $2.8 billion financing gap.

Supply chains and global value chains may also experience interruptions and further worsen the situation. Decreasing demand will further reduce the coffers of the MSMEs, as working capital begins to decrease.

This will result in their inability to pay salaries and could force them to lay off workers, driving up unemployment rates.

Overall, the survey shows more than 80 per cent of businesses reported incurring losses in the month preceding the study.

“Micro, small, and medium enterprises are key drivers of Bangladesh’s economy which account for about 25 per cent of the GDP and employs over 20 million people,” said Mercy Tembon, World Bank’s country director for Bangladesh and Bhutan, in a press release.

“The Covid-19 pandemic has hit small businesses and informal workers the hardest with loss of income and jobs. Going forward, it will be important for Bangladesh to support the recovery of micro, small-medium enterprises, especially women-owned businesses and remove constraints to their access to credit.”

The survey shows most businesses are expecting a negative impact on sales and jobs over the next six months. Seventy per cent of micro firms were not optimistic about their future sales prospects.

“Even before the pandemic hit, these Bangladeshi businesses were already in a precarious position, as they operate on slim margins,” said Wendy Werner, IFC country manager for Bangladesh, Nepal and Bhutan.

“The fact that these businesses are now in extreme distress highlights the urgent need to boost the resilience and capacity of these enterprises so they can ultimately preserve jobs and be on the road to recovery.”

In order to recover from this crisis, businesses identified cash transfers, access to new credit, and loans with subsidised interest rates as the top three most-needed policy supports.

Overall, 63 per cent of the firms interviewed said they would require financial support for more than one year to revive business operations.

Sixty-nine per cent of respondents reported that they require less than Tk 5 lakh to sustain and recover their business operations in the next three months. One reason for this could be that 65 per cent of the firms surveyed were micro firms.

Ananya Wahid Kader, a co-author of the report and senior operations officer at the IFC, gave a presentation on the survey.