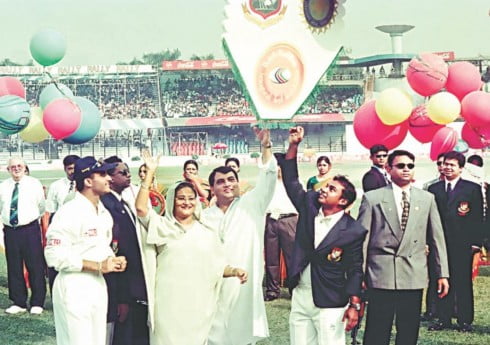 Today marks 20 years of Bangladesh’s Test journey. And when the Naimur Rahman-led Tigers, donned in the all-white jersey for the first time, stepped onto the Bangabandhu National Stadium in Dhaka on November 10, 2000, to face Sourav Ganguly’s India, cricket lovers rejoiced at the start of what they hoped would be an enthralling journey.

However, the fire and hopes ignited after Bangladesh became only the second team after Zimbabwe to post over 400 in their inaugural Test, seemed to have been doused over the past two decades. Having played a total of 119 Tests, Bangladesh managed only 14 victories while losing 89 and drawing 16.

A win percentage of 11.76 shows that moments of joy have been few and far between. After playing 34 Tests, the Tigers registered their first win in the format — a 226-run victory over Zimbabwe in Chattogram in 2005.

But more often than not, Bangladesh have been at the receiving end of humiliation. The most recent and the most embarrassing of all was when Bangladesh had orchestrated their own downfall by preparing a spinning track in Chattogram last year in September against a spin-heavy Afghanistan, only to be hammered by 224 runs by a side playing just their third Test.

The depth of the list of ignominy can be gauged from the fact that Bangladesh have been at the receiving end of 43 innings defeats till date.

The small list of victories have a few high points, with wins against England and Australia at home in 2016 and 2017 being on top. The Tigers did win an overseas Test series back in July, 2009. However, its significance reduces as it was against a West Indies side that was nowhere near their full capacity. In 2018, the Tigers managed an innings and 184-run victory — their biggest till date — against the Caribbean outfit at home, completing a 2-0 series win that remains high on the small list of glory.

Bangladesh are also lingering at the bottom of the newly formed ICC World Test Championship. The Tigers are yet to register a single point after losing all three matches played in the competition. And as it seems, even after completing a 20-year journey, Bangladesh have a long way to go before establishing themselves as a force to be reckoned with in this format.