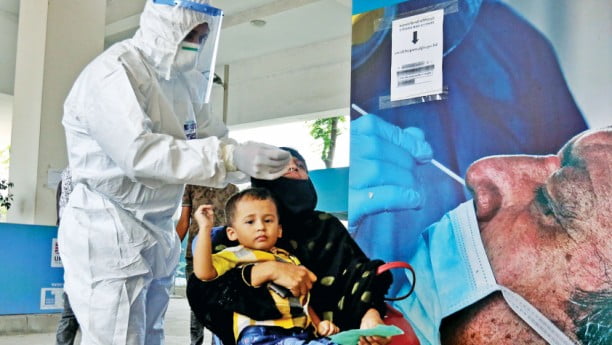 Fifteen people died of Covid-19 in the last 24 hours till 8:00am yesterday, according to a press release of the Directorate General of Health Services (DGHS).

With this, the total number of deaths rose to 6,036 which is 1.45 percent of all confirmed cases in the country.

Besides, a total of 1,469 new infections were recorded in those 24 hours which took the toll of total infected people to 417,475, added the release.

With this, Bangladesh has ranked four fold down — from 18th last week to 22nd yesterday — in the list of worst affected countries in the world in terms of the total number of confirmed cases.

The position is one step behind Indonesia and one step ahead of Czechia, according to worldometer.info.

Meanwhile, 1,439 new Covid-19 patients have recovered from their illnesses in those 24 hours.

The total number of recoveries rose to 335,027 which was more than 80 percent of all cases.

Among the 15 dead, 11 were males and four were females. All of them died in hospitals, according to the press release.

One each dead was from Mymensingh and Rangpur division, five from Chattogram and the rest eight were from Dhaka division, read the press release.