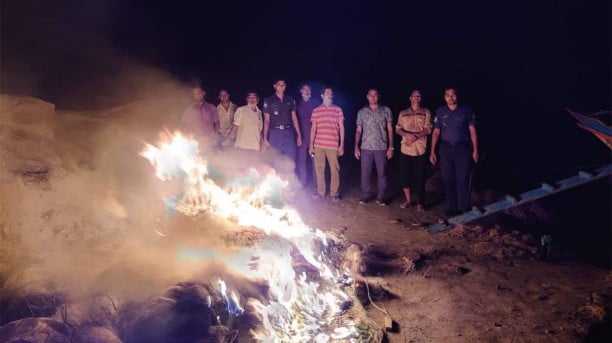 A mobile court has jailed 12 fishermen for catching hilsa from the Padma and Arial Khan rivers in Sadarpur upazila of Faridpur, defying a 22-day ban.

Of the fishermen, 10 were awarded 15-day jail each while two others were sentenced to 10-day jail each, said Sajal Chandra Shil, assistant commissioner (land) of Sadarpur upazila, today.

The mobile court team detained the 12 fishermen after launching drives at the two rivers from 3:00pm to 9:00pm yesterday while they were catching hilsa defying the ban, said AC (land) and executive magistrate Sajal Chandra Shil, who led the drive.

During the drives, nearly 70,000 metres of nets and 20 kg of hilsa were seized from the spots, said the executive magistrate.

The detained fishermen were sent to jail while the seized nets were burnt, our Faridpur correspondent reports quoting Sajal Chandra Shil.

The government has imposed a 22-day ban on catching, selling, hoarding and transporting of hilsa from October 14 to protect safe spawning of the fish during its peak breeding period.